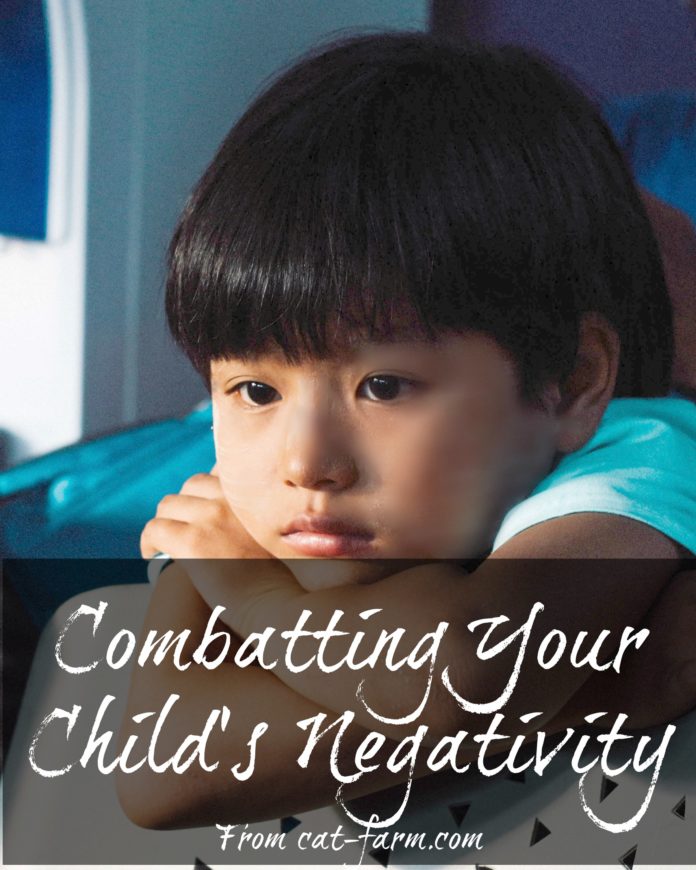 Today, my child’s summer camp counselor spoke to me (again) about his behavior.  When I asked him what happened, he, of course, told me it was the other child’s fault.  When I told him what the counselor said, he gave me this flabbergasted look, as though she clearly had it out for him and is making up stories about him.  Then came the negativity flood. That specific counselor never listens to him.  Nobody ever gets in trouble but him.  He’s the only one who ever gets yelled at.

I know that there is a slight possibility of an adult singling out a difficult child and just not liking him, but I also know when my boy uses absolute terms like always and never, he’s usually trying to shift the blame or make someone feel sorry for him so he doesn’t get in trouble. Blaming others is human nature, but I’m sick of it.  I’m entirely over the “always” and “never” statements. Eeyore isn’t welcome here.

With that, I had apparently reached my boiling point.  I told my son that if this counselor is making it seem worse than it is, then we need to have a three-way face-to-face conversation.  So, despite his desire to avoid the confrontation, we went back in and had a detailed conversation about what happened.  Both versions of the truth were shared, and he learned that he will be held accountable for what he says as well as what he does.  Accountable is the key word.

When we got home, he was feeling very down.  He was worried about what kind of trouble he’d be in with his dad, none of his friends on our street were home to play, and he was anxious. He went back to the absolutes tactic. Here’s how the conversation went down:

J: “I don’t have any friends, and I never have anyone to play with.”

J: “He’s not home, and Josh and Gavin are playing Fortnite. Stephen is at the store with his mom…” (Our boy isn’t allowed to play Fortnite.)

M: “You just named me three more friends.  So, you do have friends.  Sounds like you’re trying to tell me that you don’t have any friends available right now to play.”

M: “He’s never home? You never get to play with him? Didn’t he just spend the night this past weekend?”

M: “So it sounds to me like you’re trying to say that you’re bummed out that he can’t play right now, but not that he can never play.”

Redirecting our children in their self-talk (and ourselves in our own self-talk) is so important because negative self-talk over time can cause emotional damage and a distorted view of reality.  When we focus on keeping our children accountable for the wording they use, it really helps them to see that maybe they’re exaggerating a little—however, never tell your child, “you’re exaggerating!” Talking through each comment and shaping each one to a more realistic observation of their situation helps them to feel heard and teaches them to express their emotions literally.  Telling them they’re exaggerating or being dramatic makes them feel brushed off, unheard, and like they can just add another thing to the pile of things they’re horrible at.

In addition to shifting their emotional state, talking through absolute statements also helps to keep any intentional negativity for a function of escape from being successful.  Going about it in this way helps to reject pity party invitations without seeming cold.  It also helps the child to really assess his words, which will contribute to overcoming the lying element that is so tightly knit into ADHD.

Johnny doesn’t want to get into trouble for fighting at school, so he tries to tug on your heart strings by saying how he has no friends and everybody picks on him. Perhaps in the past, these types of statements have caused you to feel sorry for him and let him out of any consequences for his actions.  This time, however, you talk through and debunk any myth about himself that he throws at you, and still implement the consequence for the initial offense of fighting at school. Now, he has a clearer picture of his reality (he doeshave friends and not everyonepicks on him), and he also understands that regardless of why he behaved the way he did, he made the choice, so the consequences will stand.

As parents, especially mothers, this can seem harsh.  No parent wants their child picked on or friendless.  Some might argue that it’s emotionally damaging to even give them a consequence when they’re feeling so down.  I understand but disagree. While I completely understand that we must remain empathetic toward our children, we also have to think about their futures.  We sometimes need to be firm now, so that someone more powerful won’t have to be firm later.  We can’t allow them to allow negativity to win. Being compassionate while delivering consequences is completely realistic and necessary.  Discipline doesn’t have to —and really shouldn’t—equate to anger.  Our own anger and our discipline toward our children need to remain two entirely separate entities.  Stay tuned for more to come on this very soon.

What’s something you do to help your kids when they’re driven to negativity?