My boy left today for his first ever sleep-away camp.  Exciting right? Most parents would look at it as just a fun opportunity for their son to make some new friends and hang out–maybe even learn something along the way.  And then there’s me.  I have dwelled far too long on every single detail of this trip, worrying the entire way.  The thing is, his working memory deficit is a significant characteristic of his ADHD–so significant, in fact, that the score for this specific skill on his neuropsych assessment made his school counselor say, “Oh, wow. This alone can qualify him for an IEP.”  Because of this, my concerns may be different those of other parents.

Surely he’s going to forget something, lose something, or break something. Surely he’s going to be so caught up in the activities surrounding him that he won’t even care about the items he’s taking with him.  He’ll throw them wherever, he’ll lose his watch, and it’ll be a disaster. Will he make friends? Will he remember to take his meds in the morning? Will he brush his teeth well without us there to supervise?  Especially since it will be before his meds have kicked in! Will he wash when he’s in the shower? For the love of God, please, please let him have good hygiene while in close quarters with other middle-schoolers.  Middle-schoolers are the worst!

What is Working Memory, Exactly?

Peg Dawson & Richard Guare define working memory as “the capacity to hold information in mind while performing complete tasks” (2009).  This is the executive functioning skill that is involved when I ask my child to “go upstairs, clean your room, and bring down the broom.” Kids with ADHD often are weak in this skill.  The typical outcome for this type of request is that 30 minutes later, I walk into his room to find him playing basketball with the mini ball and hoop on his closet door.  The irony is that he actually has a basketball hamper right next to it, but the floor remains littered with dirty clothes.

Until recently I have done everything in my power to help him remember.  This trip started off no different.  The day before departure, I began organizing and collecting all of the items he’d need on the trip based on the email/handout that was given to us. I started my normal drill of finding the appropriate compartment for each item within the suitcase, organizing everything perfectly as usual. Then a light bulb went off. This is a learning opportunity!

I took all of the items out of the suitcase and put them back.  I called the boy into the dining room, had him grab a pencil & paper, and sat him down at the table.

“Here’s the handout from the church. You need to make your list so you can pack your bag for camp.”

“I thought you were packing it for me…” 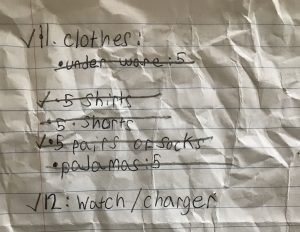 I didn’t tell him any of the items he should put on his list.  I wanted him to mentally walk through his routine and write down everything he uses. He was to write down every single item. Instead of writing “five outfits,” he had to write what that meant. What is in an outfit?  Until his working memory is more developed, he must list out every single step of an activity or every single item.  Forcing him to list the details exercises and strengthens the prefrontal cortex, the part of the brain responsible for executive functioning.

Once the list was made, he went up to his room and sat out each clothing item on the list. (He even paired them as outfits completely on his own, which is something I do! I couldn’t have been prouder!) Then he gathered all of his toiletries and put them in a ziplock. He carefully selected which compartment of the suitcase each group of items were packed into. (OMG mommy win! Apples don’t fall far after all!) Any ADHD momma will tell you that getting their child to organize anything (other than, maybe, a Pokemon card collection) is about as rare as getting a cat to do your dishes.  This was great! 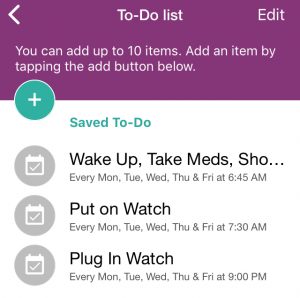 After his bag was packed I talked to him about how he would remember to carry out his daily routine.  He decided that using his watch would be the be the best option.  Instead of adding reminders myself, I gave him ownership. He told me what reminders to add and when to have the alarm go off for each task. (You can read more about this miracle watch here.) Lists like these are considered visual schedules–stimuli paired with actions.  And–as someone from whom the boy inherited his working memory deficit–I can tell you that a world without visual schedules is a sad, sad world.  Completing a task we’ve set out for ourselves and being able to cross it off of our list can be very reinforcing.

This video is a great explanation of exactly what working memory is and how it works–or doesn’t work.

I’ll be posting plenty of activities and ways to strengthen working memory and other skills kids with ADHD lack in the near future, but for now, click here for some great ways for your kiddo to work the memory muscle.

UPDATE: He has returned! And he’s super tan. Also, he did use everything in his suitcase!!! He left literally half of his things at camp, but–hey! baby steps.